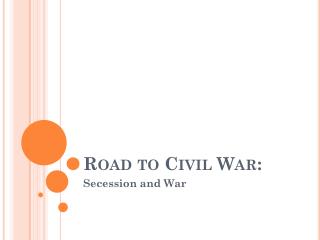 Road to Civil War:. Secession and War. The election of 1860. The issue of slavery eventually caused a break in the Democratic Party before the 1860 presidential election. Road Safety and Its Measurement - . what is road safety?road safety crosses multiple areasstakeholders of highway safety

Civil Law - . eq: what is civil law?. v. v. lawsuits may encourage business to protect employees – but not always.

Slavery and the Road to Civil War - . prelude to war. popular sovereignty. allowing the people to choose whether to be a

Road to civil war 1820 - 1861 - . slavery and the west. the missouri compromise. many missouri settlers brought enslaved

Road To Civil War 1815-1861 - . sectionalism- loyalty to state/section of nation- north,south and west had their own

The Road to the American Civil War - . early attempts at containing slavery a series of compromises uncle tom’s cabin