The Position of Viruses in the Biological Spectrum - PowerPoint PPT Presentation 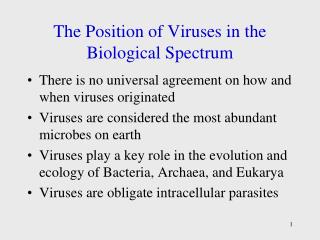 The Position of Viruses in the Biological Spectrum

The Position of Viruses in the Biological Spectrum. There is no universal agreement on how and when viruses originated Viruses are considered the most abundant microbes on earth Viruses play a key role in the evolution and ecology of Bacteria, Archaea, and Eukarya

The Position of Viruses in the Biological Spectrum

-Viruses- - . are non-living particles. most viruses are “pathogens”. pathogens are disease-causing agents. viruses

Security, Privacy and Ethics - . chapter 14 in discovering computers 2000 (shelly, cashman and vermaat). viruses. not all

Ch. 18: The Genetics of Viruses and Bacteria - . intro. bacteria and viruses are the simplest biological systems. most

Viruses and Bacteria - . chapter 18. viruses – alive?. what makes something alive? organization based on cells and dna

Viruses - . 10b part i . intro. viruses are strange particles that are not classified as living but made of biological or

19-2 Viruses - . by: katelyn, rose and ashley . what is a virus?. viruses- particles of nucleic acid, protein and

Viruses: Living or Not? - . virus . biological particles that are not made of cells viral particles are extremely small

4.7 Viruses : The Enemy Within - . by: steffany copeland. viruses are life mimicking particles. latin word for poison

Viruses Living or Not - . ???????. characteristics of viruses. among the smallest biological particles that are capable