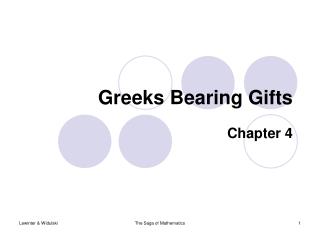 Greeks Bearing Gifts. Chapter 4. Ideas or Forms. This doctrine asserts a view of reality consisting of two worlds: The everyday world perceived by our senses, the world of change, appearance, and imperfect knowledge.

15 Great Reasons to Give Gifts - Gifts are a wonderful way to show someone how much you care. it doesn’t matter if

Peak Credit A Flight to Simplicity - . chris cook – barcampbank london 5th july 2008. what is a bank anyway?. it is a

The Greeks and the Others - . immigration and migration. migrants, refugees and the diaspora. people have been moving in

The Greeks - . sculpture &amp; the arts. greek proportion. essential in representations of the body and in

FAILURE OF ROLLING CONTACT BEARINGS - . rolling element bearings. definition: the medium of contact in between the rigid

Unit 5 Review - . ancient greece. what was one result of ancient greeks not having enough farmland to feed themselves? .