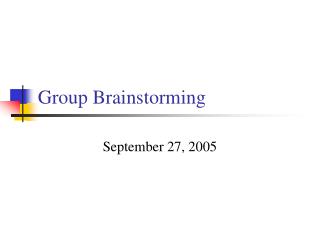 Group Brainstorming. September 27, 2005. Overview. Innovation paper questions? Individual creativity often occurs in the context of a group. Groups have both advantages and disadvantages for enhancing creativity. Identify factors that decrease creativity and eliminate them. Brainstorming - . powerful tool for design teams used to generate ideas in a group can be used on any sub-problem it is

Brainstorming - . 1. group members express any idea that comes to mind no matter how strange, weird or unusual. do not

Brainstorming - . getting ideas before you write. introduction. getting started. “writer’s block” is a common

Brainstorming - . to do? or not to do?... that is the question. brainstorming. concept:. put a group of people. in the