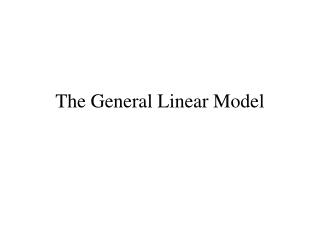 Linear Lack of Fit (LOF) Test - . an f test for checking whether a linear regression function is inadequate in describing

Linear Model of Consumption - . celebration of learning ! woot . woot . 1. list the five parts of the linear model of

In a linear regression analysis, parameters in a model of the following type are estimated: - Ii . multiple linear

Basic Analysis of Variance and the General Linear Model - . psy 420 andrew ainsworth. why is it called analysis of