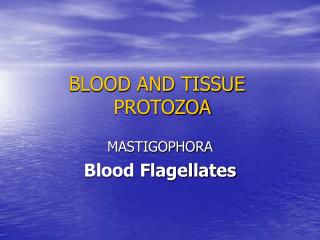 BLOOD AND TISSUE PROTOZOA. MASTIGOPHORA Blood Flagellates. TRYPANOSOMA. Classification. Trypanosomes are a group of kinetoplastid protozoa distinguished by having only a single flagellum . All members are exclusively parasitic , found primarily in insects .

Blood And Tissue Flagellates - . photos of

Blood and Tissue Fluid - . explain the differences between blood, tissue fluid and lymph describe how tissue fluid is

Histology of Blood tissue - . dr. nabil khouri. learning objectives. be able to recognize all of the formed elements

BLOOD AND TISSUE PROTOZOANS - MICRO {ST1} - . by ranjeet raman. malaria humans are the only reservoir for the four

Protozoa - . general characteristic of the protozoa are : 1- unicellular ( consist of one cell ) this cell performs all

Protozoa - . polyphyletic group of unicellular heterotrophic eukaryotes; not a single kingdom. protista is used in the

Protozoa - . general properties of protozoa protozoa are one-celled animals with full vital functions. they may be

Blood and Tissue Protozoa of Dogs and Cats - . babesia canis. b. canis is endemic in southern florida, sporadic