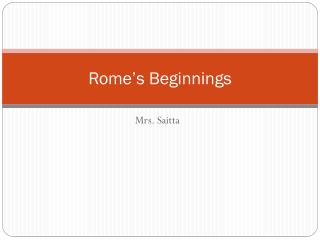 Rome’s Beginnings. Mrs. Saitta. Location:. Middle of the Mediterranean Sea Long narrow peninsula – boot shaped Toe of boot points towards Sicily Two mountain ranges: in the north the Alps the Apennines which run the length of the boot from north to south. Map . Landscape of Italy. Roman Colosseum - . it was built in rome, italy. the construction started during the reign of the emperor vespasian, who

Unit 3 - . the world after the fall of the roman empire. the surviving rome. remember: split, west fell, east survived…

Ancient Rome - . mr. williamson. describe the republican form of government in ancient rome. before the

Do Now: Day 1 - . we will begin studying the ancient empire of rome. what modern day country is rome located in? define

7.1 The Fall of Rome - . contributions of the roman empire law rule of law; many modern legal systems are based on roman