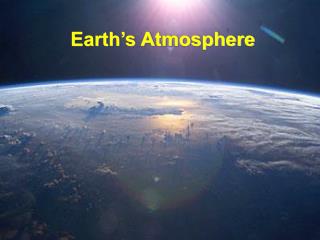 Ecology - . what is ecology?. ecology is the study of interactions between organisms and the living and non-living

What is the answer to… - . these fun and exciting vocabulary terms from science unit b????. layer of air that

EARTH’S ATMOSPHERE - . origins of the atmosphere. boom. our atmosphere was created by gases that vented from erupting

Jagadish Shukla Department of Atmospheric, Oceanic and Earth Sciences (AOES) - Rsmas, u. of miami, dec 16, 2011. on the