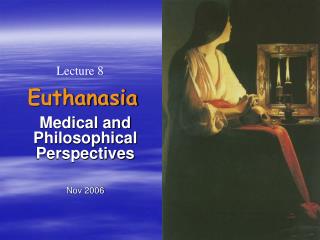 Abortion and euthanasia - . -1-. learning objective. to know and understand the overview of the course to know and

Abortion and euthanasia - . -1-. learning objective. to know and understand the overview of the course to know and

BPS Guidelines for Psychologists working with animals-2007 - . do the ends ever justify the means?. each person will have

Chapter 6: Treating or Terminating: The Dilemma of Impaired Infants - . ethical issues. the treatment of impaired infants

Arguments Against Euthanasia - . euthanasia would not only be for people who are &quot;terminally ill. euthanasia can

Euthanasia in the Netherlands and in Belgium: Law, Practice, Pitfalls and Lessons - . raphael cohen-almagor.

Euthanasia and Emergency Killing - Module 17. euthanasia and emergency killing. this lecture was first developed for

Animal Welfare vs. Animal Rights - . animal welfare. it is a human responsibility that encompasses all aspects of animal

Should euthanasia be legalised ? - . by duncan spencer. what is it?. euthanasia (from greek word καλού

Chapter 3 - . small animals as pets. what to look for:. questions when buying a pet comparing available pet options

Euthanasia - . decisions at the end of life. what is euthanasia?. euthanasia means “a good death,” or “dying

Euthanasia - . “life is a right, not an obligation” ramón sampedro. eu (good) + thanatos