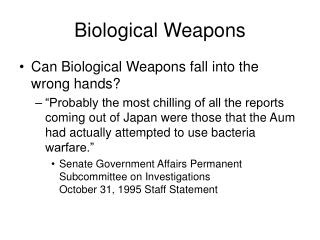 Biological Weapons. Can Biological Weapons fall into the wrong hands? “Probably the most chilling of all the reports coming out of Japan were those that the Aum had actually attempted to use bacteria warfare.” Organization for Security and Co-operation in Europe - . unscr 1540: opportunities for regional co-operation vasyl

Chemical and biological weapons – ultimate terrorist devices for near future or still a threat “in perspective”?

Weapons r’ us - . jose montes. purpose of your company. my business is a manufacture of high tech weapons. we research

Introduction, Background and Potential of Biological Weapons - . part 1 of 13 comments and contributions are encouraged:

Sharing of experience, lessons learned and effective practices in the area of - Non-proliferation of biological weapons,

Oversight Mechanisms of Research and Development in the Biological Defence Sector - Skugga. oversight mechanisms of

BIOTERRORISM &amp; BIOWARFARE - . the use of infectious agents or other harmful biological or biochemical substances

New Weapons of WWI - . modern weapons changed the way wwi was fought. the outdated methods of the past were no longer