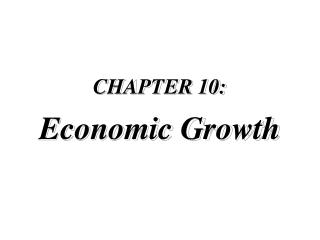 The Growth of the Thirteen Colonies - . 1607-1770. life in the colonies. essential question : how did geography affect

III. BARRIERS TO ECONOMIC GROWTH IN THE MEDIEVAL ECONOMY: - . b. medieval manorialism and peasant serfdom: the

Economic Freedom of the World - The Role of Government in the Modern Growth Economy - . presentation to institute x

The economic history of technological progress - . is at the foundation of long term economic growth easy to see why:

3.1 Introduction - . in this chapter, we learn: some facts related to economic growth that later chapters will seek to

Chapter 17 - . physical and cognitive development in late adulthood . ageism- prejudice or discrimination based on age