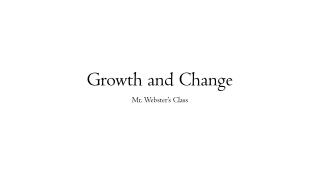 Growth and Change. Mr. Webster’s Class. Vocabulary. c otton gin – a machine that removes seeds from cotton fiber c apitalism – economic system in which people and companies own the means of production c apital – money or other resources used to create wealth Researching Childhood Growth and Change - . bio-politics, affect, attractors. what am i up to?. there have been good

Adolescence—Understanding Growth and Change - . have you noticed…. your friends have gotten taller. you have sudden