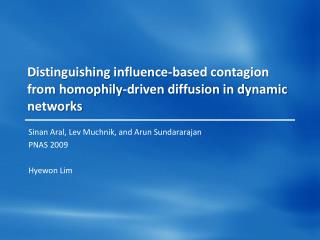 Limits of Diffusion in Dynamic Networks - . by james moody duke university. work reported in this presentation has been

Contagion in real social networks: insights from social insects - . michael otterstatter zachary jacobson. what is a

Homophily and heterophily in the position-generated networks - . dan ao department of sociology the chinese university of