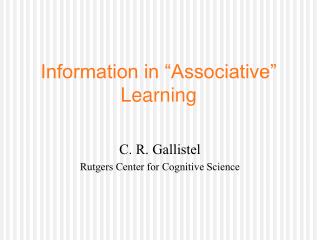 Information in “Associative” Learning. C. R. Gallistel Rutgers Center for Cognitive Science. Temporal Pairing. Thought to be essential for the formation of associations Assumed to be the critical variable in work on neurobiology of learning (LTP) Conditional learning: Switching associations - . are there any types of learning that associative theory cannot explain?.

What is learning? - . what makes a good comedian?. learning is the hedgehog concept of schools. where does learning

Learning Objectives - . understand the importance of project procurement management and the increasing use of outsourcing