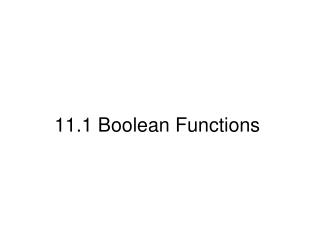 11.1 Boolean Functions. Boolean Algebra. An algebra is a set with one or more operations defined on it. A boolean algebra has three main operations, and, or , and not , (typically operating on the set {0,1}). UNIT - 5 - . functions and pointers. function. functions is a sub-program that contains one or more statements and it

Exponential and Logarithmic Functions - . chapter 4. texpoint fonts used in emf. read the texpoint manual before you

Chapter 2 Algebraic Methods for the Analysis and Synthesis of Logic Circuits - . fundamentals of boolean algebra (1).

Boolean Satisfaction - SAT - . among all possible finite domains, the booleans is a specially interesting case, where all

Life Functions - . objectives. analyze the processes by which organisms representative of the following groups accomplish

Lecture 4 Genes and Their Functions （ 2 ） - . in the previous lecture. heredity materials nucleic acids and their