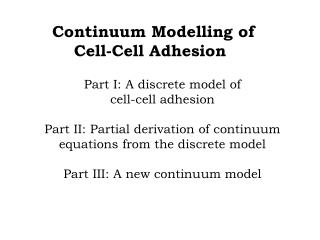 Modelling of Cell Cycle - . budding yeast biology. the cell cycle is the succession of events whereby a cell grows and

Cell Adhesion and Extracellular Matrix - . cells in tissues can adhere directly to one another ( cell–cell adhesion )

Cell-cell adhesion occurs through morphological structures and CAMs - . cell adhesion is a dynamic process that plays an

Homology modelling of cell-envelope proteinase - . engineering of the substrate binding region of the subtilisin-like,