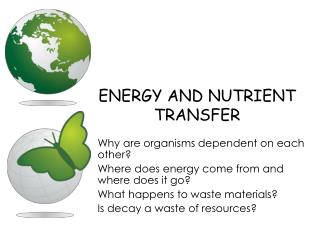 ENERGY AND NUTRIENT TRANSFER. Why are organisms dependent on each other? Where does energy come from and where does it go? What happens to waste materials? Is decay a waste of resources?. Energy Flow. The sun is the principle source of energy input of biological systems Energy and Nutrient Relations - Energy sources. organisms can be classified by trophic levels.autotrophs use inorganic

Energy Transfer - . aditya, caca, sammy grade 8.1. introduction. energy transfer is how energy is moved from one place to

Energy Transfer - Energy. energy transfer. zap!. what is energy?. (physics) the capacity of a physical system to do work;

Energy Transfer - . adenosine triphosphate the energy currency. the energy in food does not transfer directly to the

Energy Transfer…. - Energy transfer…. examples of lots of kinetic energy. what about this one…. so what does k

Energy: Conservation and Transfer - . matter. anything that takes up space and has mass. mass. the amount of matter in an