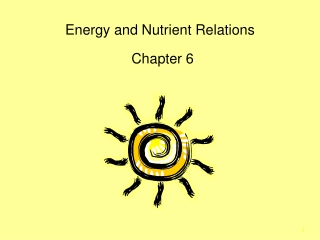 Energy and Nutrient Relations. Chapter 6. Energy Sources. Organisms can be classified by trophic levels. Autotrophs use inorganic sources of carbon and energy. Photosynthetic : Use CO 2 as carbon source, and sunlight as energy. Energy and Nutrient Relations - Energy sources. organisms can be classified by trophic levels.autotrophs use inorganic

ENERGY AND NUTRIENT TRANSFER - . why are organisms dependent on each other? where does energy come from and where does it

Ecology: Energy Flow and Nutrient Cycles - . essential questions: how does energy flow through the earth? how do

Can nutrient therapy enhance your energy? - Nutrition suggests preserving a method towards the regimen of consuming and

Nutrient - . the nutritients account for more than 99.9% of the food. the main classes of nutrients are : carbohydrates,

NUTRIENT - Healthy. food. what do you think it is?. energy. be active. nutrient. grow. proper body