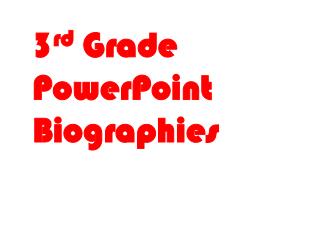 3 rd Grade - Lesson 7. 3 rd grade. the sixteenth note. paw paw patch. review. what is the name of our new note? what is

3 rd Grade - . language arts/crct practice. which is not a run-on sentence?. beth entered the contest she won a prize.

3 rd Grade - . mrs. cain is going to read a story about an adventure. night of the gargoyles by eve bunting you will

3 rd Grade - . ms. tendziegloski. &quot;hands on top” &quot;everybody stop”. which is larger? the ounce or

3 rd grade - . eog practice. calculator inactive. look at the number sentence below. +0 =20. what number goes in the box

3 rd Grade - Lesson 6. 3 rd grade. review. what note does the song start on? what beat do the tambourines rest on? what

3 rd Grade Algebra - . m3a1. students will use mathematical expressions to represent relationships between quantities and