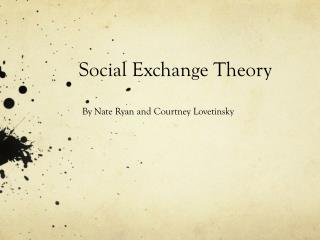 Social Exchange Theory. By Nate Ryan and Courtney Lovetinsky. Background . Originated during 1950s, primarily through George Homans. Illustrates effort to fuse the principles of behaviorism and economics with other ideas and apply them to the concerns of sociologists.

How to Use Theory - . to support ideas to explain something complicated to understand something confusing to clarify

SOCIAL, EMOTIONAL, AND BEHAVIORAL FUNCTIONING OF CHILDREN EXPOSED TO MEDICAL TRAUMA: A THEORY OF HARDINESS - . robert b.