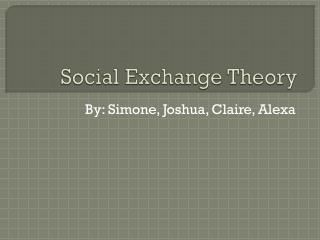 Social Exchange Theory. By: Simone, Joshua, Claire, Alexa. What is This Theory?. The social exchange theory is a psychological theory that attempts to explain the social factors that influence how individuals interact within relationships. . This Theory Focuses on:.

Social Identity Theory - . in the social identity theory, a person has not one, “personal self”, but rather several

Social Action Theory, Feminism and The New Right - . introduction to social action theory (max weber and the birth of the

Social Relations - . altruism, helping behavior, and conflict . why do we help?. social exchange theory: the theory that

THE EXCHANGE THEORY - . the importance of the idea of exchange in anthropological theory. the exchange theory of

Social Contract Theory - . the ideas behind the declaration of independence and the american revolution. social contract

Social Capital in Theory and Practice - . environment. society. economy. what will i tell?. background – me why social

CRITICAL THEORY AND HABERMAS - Critical theory. critical theory was that defined by max horkheimer of the frankfurt