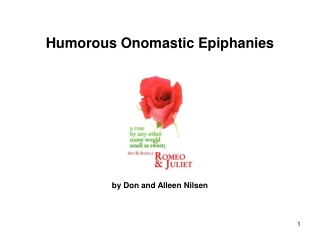 Humorous Onomastic Epiphanies. by Don and Alleen Nilsen. Calling Someone Out of Their Name: Henry Louis Gates Jr.’s Father. Oh, the possibilities! - . (how technology has continued to spark my teaching and learning). the early days…. handouts.

Humorous Personal Narrative - . chocolate cake for breakfast investigating the model 1) did you find the model

Worksheet 1 on “The Dead” - . define “epiphany” in two traditions: greek and christian. when is the feast of