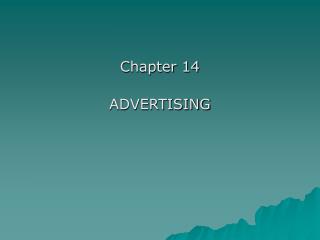 Chapter 14 ADVERTISING. What is Advertising?. Advertising is the public promotion of something such as a product, service, business, or event to attract or increase interest in it. Types of Media. Medium is a channel or system of communication. Chapter 14 Advertising: The Art of Attracting an Audience - . learning objectives. after completing this chapter,

Chapter 19 - Advertising - . what effective advertisements have you seen recently? why do you think the ads are