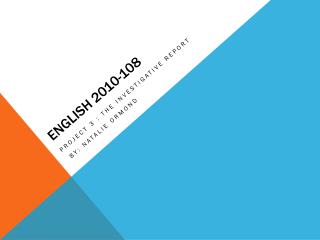 English 2010-108. Project 3 : The investigative report By: Natalie Ormond. The Corporate Presence at SLCC . Intro. At school these days almost every flyer or poster you see will have on the bottom: “Find us on Facebook” or they will have an exact link to the organizations Facebook page. Physics 108 - . introduction to engineering/physics. objectives of physics 108. learn about the different engineering

Chapter 108 - . management of poisoning. poisoning. over 2 million cases reported in the u.s. annually 23,618 deaths in

English A, spring 2010 - . engag1/engal1, campus. what is happening today?. registration introduction to english

2010 English Trial Exams - Purpose of today's seminar: . to inform you of the oral presentationto remind you about