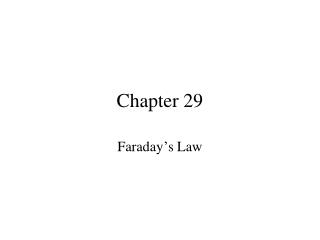 Chapter 29. Faraday’s Law. Electromagnetic Induction. In the middle part of the nineteenth century Michael Faraday formulated his law of induction. It had been known for some time that a current could be produced in a wire by a changing magnetic field. Chapter 29 - . skill themes in dance. chapter 29 key points. chapter aims to foster an understanding of the teaching of

Chapter 29 - . electromagnetic induction. induced current. you mean you can generate electricity this way??!. for my next

Chapter 29 - . musculoskeletal care. objectives (1 of 2). describe the functions of the muscular system. describe

Chapter 29 - . caring for the child with a neurological or sensory condition. a &amp; p review. nervous system

Chapter 29 - . the sun. sec 1 structure of the sun. people believed the sun’s energy came from fire they believed the

Chapter 29 - . plant diversity i how plants colonized land. figure 29.1. overview: the greening of earth looking at a