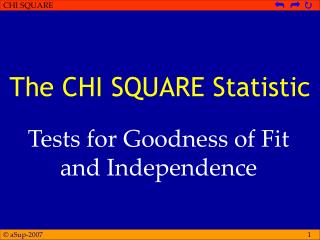 The CHI SQUARE Statistic. Tests for Goodness of Fit and Independence. Preview. Color is known to affect human moods and emotion. Sitting in a pale-blue room is more calming than sitting in a bright-red room The CHI SQUARE Statistic - . tests for goodness of fit and independence. preview. color is known to affect human moods

The chi-square statistic - . chapter 16. the tests we’ve used so far…. all involve one quantitative variable one

Chi-Square - . test of significance for proportions fetp india. competency to be gained from this lecture. test the

CHI SQUARE - . gender. research question. is there a relationship of emotional i ntelligence(ei) level between male and

Chi-Square - . what is chi-square?. used to examine differences in the distributions of nominal data a mathematical

CHI SQUARE - . goodness of fit. research question. is the proportion of number of students occupying the emotional