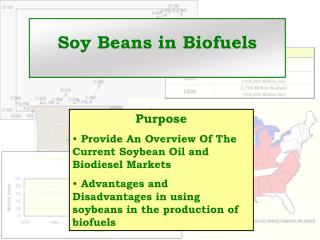 Soy Beans in Biofuels. Purpose Provide An Overview Of The Current Soybean Oil and Biodiesel Markets Advantages and Disadvantages in using soybeans in the production of biofuels. History. Soy Beans - . by: chandler bunch and jonathan hope. how is the crop planted. seed are be planted in cultivated or tilled

Biofuels in Aviation - . by: dima richards per. 1. thesis. aviation should convert to using biofuels because it will

Biofuels - 1991 – 2011: a 20 year history of biofuels policy and the impact on the recreational marine industry thom

Biofuels - . adam knox and john chang. history of biofuels. e. duffy and j. patrick in 1853 were the first scientists to