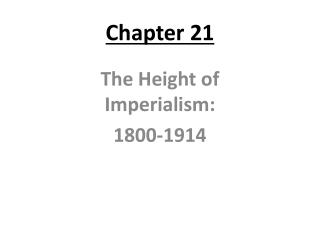 Chapter 21. The Height of Imperialism: 1800-1914. Colonial Rule in Southeast Asia. A new form of imperialism began in the 1880’s, focusing on Africa and Asia. European powers like Great Britain, France, Spain, and Netherland began to grab as much land as possible in these parts of the world.