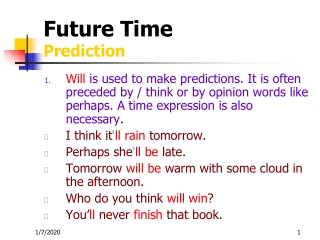 Future Time Prediction. Will is used to make predictions. It is often preceded by / think or by opinion words like perhaps. A time expression is also necessary . I think it ‘ ll rain tomorrow. Perhaps she ' ll be late. Tomorrow will be warm with some cloud in the afternoon. IMF Prediction with Cosmic Rays - . the basic idea: find signatures in the cosmic ray flux that are predictive of the

Sharing knowledge and information: three views of the future - . david bawden city university london. a view over the

Change the Prediction One student at a time - . “almost one million students who start ninth grade each year will not