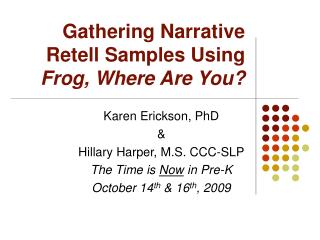 Using Fables and their Morals - The frog and the oxa young frog, amazed at the huge size of an ox, rushed to tell her

Frog Body Parts and Functions - . anatomy of a frog’s head. functions of the body parts that make up the frog’s head.

Writing a Narrative - . grade 7/8 language arts. what is a narrative?. an account of a sequence of events, usually in the

The Life Cycle of the Frog - . jeannette rendon. how does a tadpole become a frog?. what are the stages of a frog’s

Rethinking Equity and Teaching for English Language Learners (RETELL) - . what does it mean for us?. massachusetts

By, Josie Hintz - Inside a frog’s habitat. by, josie hintz. frog habitats at the innovation center. there are many

Frog and Toad - . this week we read frog and toad are friends. did you know that there are many similarities and

The Life Cycle of a Frog - . 1 st grade jeannette rendon. stages of a frog’s life. egg - tiny frog eggs are laid in