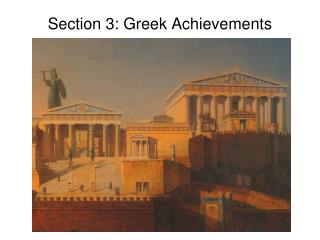 Plantations- More than just a house - Culture of the antebellum period:. in the us, interest in greek things developed

Greece Achievements - . new . objective: swbat describe the achievements of the greeks and explain how those

Chapter 9 Section 1 - . life in ancient rome. what were some of ptolemy’s scientific achievement?. ptolemy mapped more

Section 1 Review - . section 1; pg. 106: what in greece’s geography kept the early tribes apart from each other,

Greek Art - . circa 500-1 bc or bce. greek pots. the only remaining greek painting is found on pottery. greek artists

Unit 2-Early Civilizations - . chapter 5. section 1 -where was ancient greece found? -what did greece lack as a region?

Section 2-5 - Click the speaker button to listen to the audio again. section 2-5. the polis: center of greek life. by 750

Aim: What is the Golden Section? - . do now: what do you know and/ or what do you want to know about the golden section