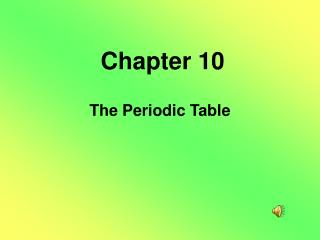 Chapter 10. The Periodic Table. Early Attempts at Classification. Johann Dobereiner. German chemist – 1817 He found the properties of metals Ca, Ba and Sr were very similar. He also noted the atomic mass of Sr was about midway between those of Ca and Ba. He grouped elements into triads.