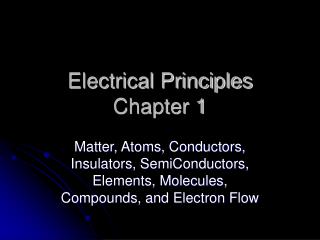 Electrical Principles Chapter 1. Matter, Atoms, Conductors, Insulators, SemiConductors, Elements, Molecules, Compounds, and Electron Flow. Matter. Matter. What is Matter ? Matter is anything that has mass and occupies space. Matter can exist in a state of gas, liquid, or solid. Matter. Chapter 18 Electrical properties - . electrical conduction how many moveable electrons are there in a material (carrier

Electrical Stimulation Currents - . therapeutic modalities chapter 5. electricity is an element of pt. may be most

Chapter One Electrical Design and Component Basics - . introduction. rural and domestic electrical systems cause many

Basic Electrical Principles - . key word here is basic. a fter this lesson you will not be able to hotwire a car or build

Electrical Safety - . history of (electrical) safety safety in the hospital role of clinical engineer rules and

Chapter 4: Principles - . the regulatory foundation. contemporary loac is built on a foundation of core principles these