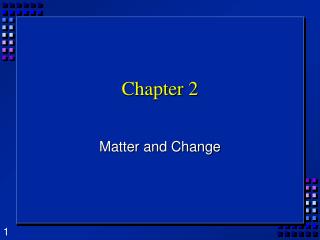 Chapter 2. Matter and Change. What is Matter?. Matter is anything that takes up space and has mass. Mass is the amount of matter in an object. Mass is resistance to change in motion along a smooth and level surface. Examples. Types of Matter.

Honest Work: Chapter 2 on Deception - I discuss the readers in chapter 2: pp.