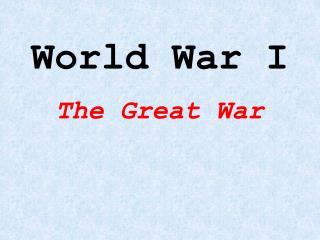 World War I. The Great War. Two Predictions. “The Future Belongs to Peace” – French economist “I shall not live to see the Great War” – Bismarck. Pursuit of Peace. 1896: Olympic games in Athens Emphasized “love of peace and respect for life” 1895: Nobel Peace Prize began