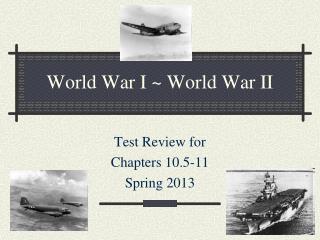 World War I ~ World War II. Test Review for Chapters 10.5-11 Spring 2013. Amendments to the Constitution . The 14 th Amendment is based on the one-person-one-vote concept The 19 th Amendment gave women the right to vote. World War I.