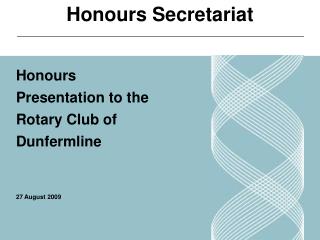 Honours Secretariat. Honours Presentation to the Rotary Club of Dunfermline 27 August 2009. What are honours for?. Recognising: Achievement Exceptional Service. They are for people who:. Have changed things, with an emphasis on achievement Agriculture Honours - Confused about whether to enroll for an agriculture honours? well, dolphin(pg) college is now

Honours Presentation - . “directing textual focus and the engagement of peripheral vision in a hemispherical

Individual Honours - . a variety of people receive honours for many different reasons such as impacting on society,

Honours Exam - Here is the rotuine on honours 4th years examination. all students should download all file from here to

BVSc Honours Program - . 2008. agenda. why choose honours? what is required? who will be my supervisor? what help is

Honours and Awards - . presentation to hvoss by avm mike smart. introduction. the honours system – aims the