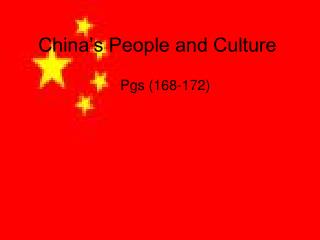 Culture(s) and Learning - . issues of power, cultural identity, and educational culture(s), and the impacts of these on

TRANSITION IN THE PEOPLE S REPUBLIC OF CHINA - . . the era of reform:1978 --. three decades of stabilityno cultural

China and the Chinese People - . by the end of this lesson you will:. know some basic facts about china be able to greet

People and Culture of 1965 - . the clothes make the man. just like today, young people let the world know how they wanted