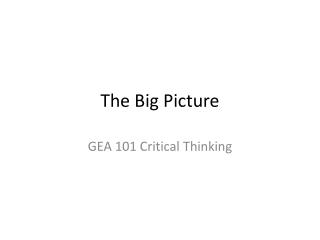 The Big Picture. GEA 101 Critical Thinking. The Importance of Context. When someone provides you with evidence for a truth-claim, you have to ask: Does this evidence really support the claim? Is there other relevant evidence I should look for before assessing the claim?. Words out of Context. The Big Picture - . how are public schools funded? ~tim hill will discuss later this afternoon. districts/charters

The Big Picture - . to assess the global carbon budget we need information that is ‘everywhere, all of the time’ many

The Big Picture - . plsc 379r lecture 6. setting the stage. two actors, a and d can’t agree on how to split some issue

The Big Picture - . contact: 1492-1606. the columbian exchange spain’s empire in the americas. colonial

The Big Picture: - . counting events in a sample space allows us to calculate probabilities the key to calculating the

The BIG Picture - . for new and prospective christians session 4. a creator would design man with the desire and capacity

THE BIG PICTURE - . the department’s mission is to enforce the law and defend the interests of the united states

The “ BIG ” Picture - . a presentation by customer relationship management. a glimpse into central accounting.