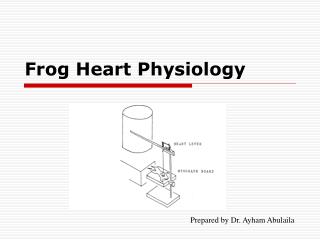 Frog Heart Physiology. Prepared by Dr. Ayham Abulaila. Properties of heart muscle. Learning Outcomes: By the end of this session you should be able to: Handle living tissue so that its activity is preserved. Heart Physiology and the Pacemaker - . comparison of voltage change data sets made by the heart with and without an

Frog Forest - . expectations . work to your full potential do your best work turn in all assignments on time use your

Frog - . lay out fabric and put pattern pieces on top. pin and cut out. pick 2 buttons for the eyes. place and stitch

Heart Physiology - . what a job!. it pushes your 6l of blood through your blood vessels over 1000 times a day!. cardiac

Frog - . by briana chamberlain. frog defenses. frogs are poisonous. frogs live in the trees and the water. frogs eat

Frog Heart vs. Fish Heart - . a. b. how does the heart in a differ from the heart in b? identify a and b as either fish

Frog Dissection - . comparing frogs with humans. frogs have a lot of the same organs that humans do. by dissecting a