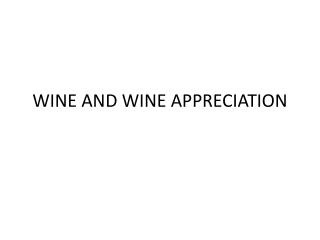 WINE AND WINE APPRECIATION. Enology = Winemaking British version of the word is Oenology ~ stemming from the Greek origin oinos (wine) and logos. What Is Wine. Wine Appreciation Training - . simonsig. the name simonsig means “to see or have a view of the simonsberg

Wine tasting &amp; appreciation for the wine consultant - . wine in the world wine at agua dulce vineyards how wine

WINE - . ... there is one wine that will satisfiy your senses. wine units of competence. describe the basic elements of

Wine - . a deeper look into the cellar! by pearl ferguson. what is wine. an alcoholic drink made through fermentation

Wine : - One of rome’s greatest pleasures. wine :. final project for the 2014 honors seminar “art, architecture, and