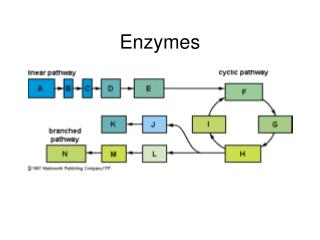 Enzymes. Enzymes. Enzymes are usually proteins which act as biological catalysts for metabolic reactions Enzymes enhance the rate at which the chemical reactions of a cell take place. They do not affect the equilibrium constant. Mechanism of Enzyme Action. Enzymes - . have properties shared by all catalysts enhance the rates of both forward and reverse reactions so

ENZYMES - . in the biology unit on digestion, you’ve studied enzymes , and how they breakdown foods so that our bodies

Enzymes - . spontaneous reactions?. if reactions are “downhill”, why don’t they just happen spontaneously? because

Enzymes - . the essential key to the functioning of all cells. enzymes -. are proteins act as organic catalysts, which

Enzymes - . lab 5. enzymes. reaction characteristics e nzymes are catalysts : substances that speed up or facilitate a

Enzymes - . enzymes are proteins enzymes are catalysts - substances that speed up reactions without being altered in the

Enzymes - . enzymes : molecules that catalyze reactions in living cells -most are proteins -lower the activation energy