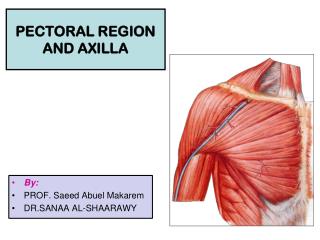 PECTORAL REGION AND AXILLA. By: PROF. Saeed Abuel Makarem DR.SANAA AL-SHAARAWY. OBJECTIVES. At the end of the lecture the students should be able to : Identify and describe the muscles of the pectoral region. Pectoralis major. Pectoralis minor. Subclavius. Serratus anterior. PECTORAL REGION AND AXILLA - . prof . saeed abuel makarem. objectives. by the end of the lecture the students should

PECTORAL REGION AND AXILLA - . by: dr.sanaa al-shaarawy. objectives. by the end of the lecture the students should

The Breast and Pectoral region - . the breast. the breasts are specialized accessory glands of the skin that secrete milk

Axilla - . what is the axilla?. pyramid-shaped region (armpit) connects arm to rest of body. what is in the axilla? blood

AXILLA - . contents of the axilla. axillary artery and its branches. axillary vein and its tributaries. cords of the

AXILLA - . it is a fat filled pyramidal space between the lateral thoracic wall and the upper arm. nerves, blood vessels

Pectoral Girdle - . a pectoral girdle is a skeletal complex in the body wall immediately behind the head that articulates

Pectoral Implants Dubai - For quite a while now, ladies have been looking for the expert direction of a plastic