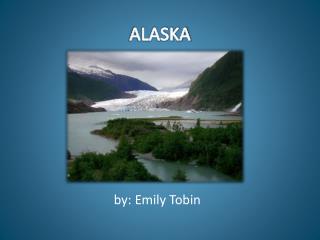 Alaska’s Timeline - . by aubrielle champagne. 1719 to 1721. luzhin and yeverinov went to explore alaska. they were

Alaska's ABC Book - . nicole. a. a is for alaska. alaska is a neat state in north america. it is mostly below zero there

The state of Alaska - . the last frontier. facts about alaska. 1. alaska is one of the best educated states in the united