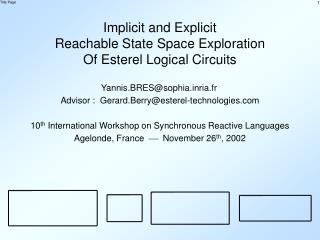 Charcoal - . drill: take out progress report. title a new page: “charcoal/ chalk” you may want to make a 2 page

Title guarantee; Title report; Chain of title; Title search. - 129. in making the decision of whether or not to issue a

Figure and Form - . homework: design a title page for your new project. include – the title ‘figure and form’

Appendix 1: Table of Contents - . progress is possible page 2 the government’s obligation page 6 steps to fixing the