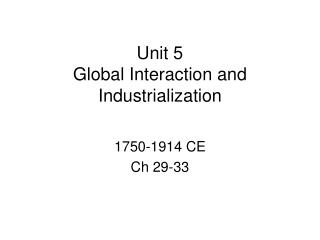 Unit 5 Global Interaction and Industrialization. 1750-1914 CE Ch 29-33. Issues of Periodization. Why begin with 1750? Major revolutions occur after Why end the period with 1914? Begin WWI. Idea #1: Imperialism and Territorial Expansion. 2 nd Round of European Expansion Unit 7 and 8 Questions - . global 9 review myers. which united states foreign policy was used to maintain the

The Living Environment - . the study of organisms and their interactions with the environment. topics. unit 1: ecology