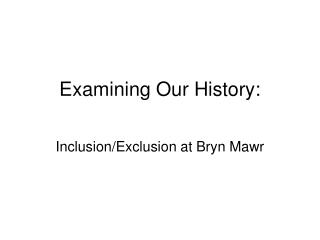 Examining Our History:. Inclusion/Exclusion at Bryn Mawr. … for the “Advanced Education of Females”. Joseph Taylor directed in his will that his money be used to erect buildings “for the comfort and advanced education and care of young women, or girls of the higher classes of society.” Case Study of the ArcGIS Marine Data Model: Examining Habitat Utilization Patterns of Reef Fish Along the West Coast of

THE HISTORY OF MIDWIFERY - . group 9. objectives. by the end of this presentation, one should know: the history of

From Research to Practice Examining Gender Differences to Increase Success for All - . presentation to the american