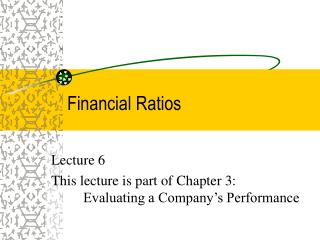 FINANCIAL RATIOS - . used to measure performance of business to industry or established result – it is irrelevant if

Financial Ratios - . overview. levels of information the power of ratios a context for using ratios different

Financial Ratios - . four basic types - most commonly used for each - can be used for some financial companies.

Using Financial Ratios - . a2 business studies. aims and objectives. aim: to understand how to use financial ratios.

Ratios and Financial Analysis - . ratios : why? comparability among firms of different sizes? provides a profile of the