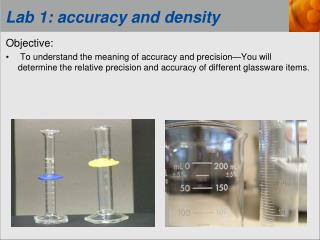 Lab 1: accuracy and density. Objective: To understand the meaning of accuracy and precision—You will determine the relative precision and accuracy of different glassware items. Water displacement. To learn to measure volumes and masses (using volumetric glassware and top-loading balances). Quick facts to Pass the SOL - . 1. the same substance always has the same density regardless of size. 2. as pressure

Daily Challenge 9/16 - . is there a difference between accuracy and precision? why or why not?. accuracy vs. precision.