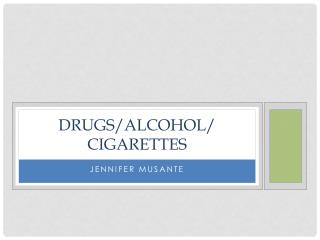 Drugs/Alcohol / Cigarettes. Jennifer Musante. Introduction. When you are pregnant, it is important that you watch what you put into your body. Consumption of illegal drugs, alcohol and cigarettes is not safe for the unborn baby or for the mother. Alcohol and Drugs - . effects and dangers. homework :. what health problems are associated with drinking alcohol?